Can you feel the ghosts? Do you hear the laughter? You’re on Old State Street in the late 1800s. Vehicles of the day are the trolley, the buggy and the bicycle. “Entertainment Row,” as the 1100 block of State Street was called, is vibrant and bustling. People shop at the grocery, pick up a potion at the medicine store, congregate at clubs, and watch a show at one of the leading nickelodeon theatres of the day...

The three buildings that are now the Plymouth Tavern have a long and colorful history. In the late 1800s, our middle building housed the Erie Cut Rate Medicine Store, and the north building was occupied by the Public Grocery and Supply Co. In the years following, the second and third floors of these buildings were home to several clubs, some of which were the Pickwick Club, Erie Legion Club, Marquette Club, Knights of Columbus, and the Foundry Foreman’s Hall.

One thing we've learned in all the years of running our restaurant is that no two guests are the same. We can customize the dining experience for  anyone who walks through our doors. 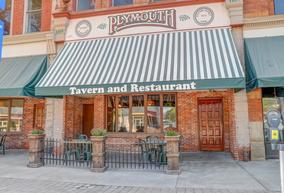 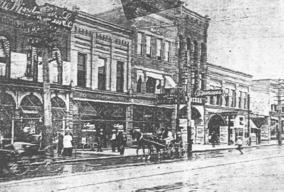 The 1900s saw the arrival of the Princess Theatre and the Grand Theatre in our middle and south buildings, respectively. For decades these nickelodeons were a source of entertainment and amusement for the people of Erie. In 1935, the main building was sold to the Eckerds, and for the next 30 years Eckerd Drugs was headquartered on this site. From 1965 until 1973, Tom Quinn fixtures supplied first-class mahogany coolers to many taverns and clubs. Both of our bars are his work.

For over 100 years, people have gathered here to relax, converse, and be entertained. In 1973, we became a part of this tradition.

Welcome to the Plymouth!